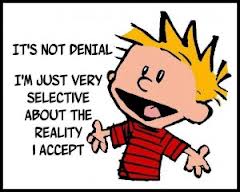 Today’s phrase is cognitive dissonance. Dictionary definition: the state of having inconsistent thoughts, beliefs, or attitudes, especially as relating to behavioral decisions and attitude change.

This has a very specific significance to me.  After I started questioning everything I was fought to hold on what I was taught to believe and the world that I actually observed.  I leaned a lot of personal anecdotal evidence to cling to my religion. Looking back all of those had perfectly natural explainations but I didn’t want to give it up.

For me this came to a head during my wife’s second miscarriage. I tried to stuff it all down. All the conflicting views I held. The biggest being that god loves me and wants the best for me. At the same time hurting me so much. Also “all life is precious” while simultaneously taking this unborn life I already loved away before I had a chance to meet it.

I hurt. I was confused but still played the “good christian” leading the worship service and hating good with every fiber of my being. I didn’t tell anyone about this and figured it was just a problem with my faith that I needed to sort out. I later found out this wasn’t just a me thing that didn’t effect anyone else.

Later on, after I told my wife about my atheism and how I came to this new conclusion, she told me how angry she was with me. Not that I didn’t believe anymore but that I didn’t tell her about my doubts as they came up. She had been feeling the same way too but didn’t think she could lean on me because she thought I thought god was infallible and couldn’t be questioned.

My cognitive dissonance wasn’t just something that was in my own head, it was actively hurting the ones I love.

I’m sorry doesn’t begin to cut it but it’s all I can offer. I denied my own thoughts to hold on to bronze aged fairy tales. I may seem cynical about the who thing but after hearing that from the person I promised to spend the rest of my life with I think I have good reason to be.

Well at least you finally resolved the conflict. That’s good. In my case I knew since I was 8 years old that there was no god.

Yeah I wasn’t indoctrinated until I was about 12 :-/ I think the older you are the harder it is to break it.

[…] segregate ourselves from people.  I know for me I did this for a long while.  This is known as cognitive dissonance.  It’s hard to break away from this mindset but in order to believe true things (which has […]